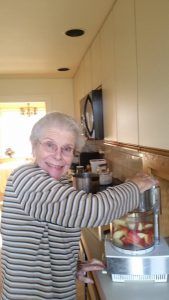 Mom bakes all sorts of pies. Two of my favorites are her apple pie and her rhubarb pie. These are pretty straight forward fruit pie recipes, but they are consistently the best pies to be had. Tarting them up would only detract from their wholesome deliciousness.  The rhubarb is just rhubarb-no strawberries, none of that, no way! The apple is just apple. No lemon. I asked Mom if she preferred a particular apple variety for her baking. She said some people were very particular about which apple to use in what recipe; she prefers to use Golden Delicious for everything but she didn’t think it matters much.

When I was a sprout and my birthday neared, my mother would ask me what kind of cake I wanted. Mom is a great cook and my brothers would agonize over the decision when their turns rolled around, but I knew exactly what I wanted: rhubarb pie. Never mind that it wasn’t cake, and never mind that my birthday is in August when rhubarb is out of season, that’s what I wanted and when my birthday came, she brought out a pie, festooned with a candle for each year. I still look forward to rhubarb pie on my birthday, even though there is no longer room enough for all the candles. 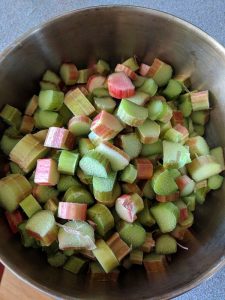 Combine flour and sugar and shake it over the cut-up rhubarb, mixing it so rhubarb is coated. Allow rhubarb to soak into flour and sugar while you make your pie crust. Line a buttered 9” pie pan with crust and fill with rhubarb mixture. Dot with butter and apply top crust. Cut vents in top crust and sprinkle very lightly with sugar and cinnamon. Protect crimped edge of crust with foil and bake at 450f for 40-50 minutes.