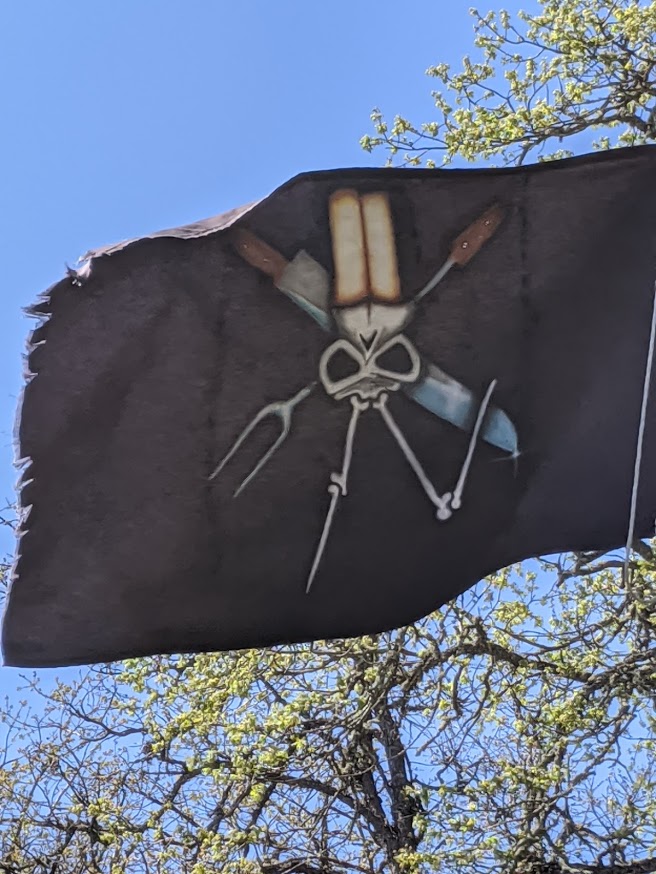 April 11th, 2020. For the first time in decades, the Easter Bunny BBQ was cancelled, all because of the Damned Contagion. Amy and I decided we would celebrate the holiday between ourselves. It is important to maintain your normal routines when quarantined. With no guests expected, Social Distance Bunny BBQ 2020 was a low-key affair. 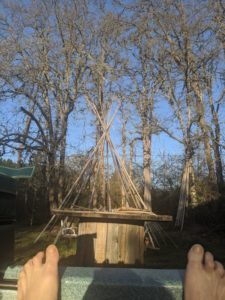 I started the morning with a leisurely soak in the hot tub before running the Bunny Jack up the flagpole. We flew it upside down, to signal our distress.

I made a mushroom omelet for breakfast, using morels Amy and I had found before they locked down the forest.

After breakfast, I boned a rabbit and prepared a roulade. Just because the party was only the two of us, there was no reason we couldn’t cook a rabbit. Without the pressure of hosting, I could spend more time on cooking. Rabbit roulade requires a good deal of preparation before it even gets to the Dutch oven, at which point close attention is required. If I let the heat get away from me all that preparation would be for naught.

Amy made her rabbit cake after I was through making a mess in the kitchen. The spiced carrot cake is a special recipe she has made at every Bunny Roast since the day we got married. I look forward to it every year. This year it was a little smaller, and in the spirit of the lock-down, she improvised the decorations with things she had in the pantry. I think it came out beautifully, don’t you? 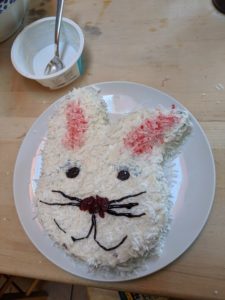 Dave and Kel were going to get a bike ride in, but there was a cold, strong wind blowing, so they dropped by for a visit. They brought their own chairs and refreshments and kept their distance. I had a fire going in the dugout. We sat at opposite ends of the log and chatted, imbibing our preferred libation. They drank gin & tonic, I had a beer and Amy drank from a bottle of rose my brother and his wife gave us for our anniversary.  It was great to see them but it really brought home how much I was looking forward to seeing my family and friends. Damn the Contagion! 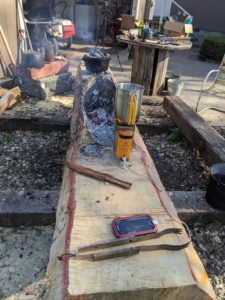 I got the rabbit going over the coals, and put some eggs on to boil. Dave and Kel left before I was done cooking. Without the pressure of guests, we ate a leisurely dinner when the roulade was finished, watched some television and retired early, postponing the egg hunt and barbequing rabbit until Easter Sunday. 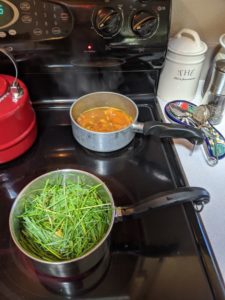 The next morning Amy and I experimented with making dye for our Easter eggs. We used a mixture of pine needles and grass for green. Amy came up with some sort of concoction with turmeric which yielded a bright orange. The red wine actually turned the eggs blue and sparkly. We only did four eggs, but we still had a spirited hunt in the back yard. 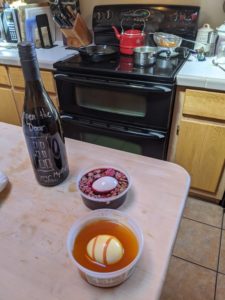 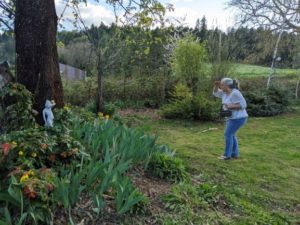 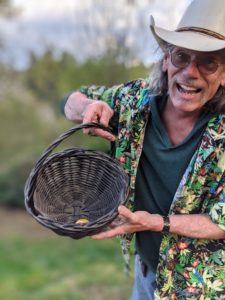 There was a near constant stream of bicyclists rolling by. Elke and Brian paused on their ride to wish us a happy anniversary. They kept their distance and left after a short visit. 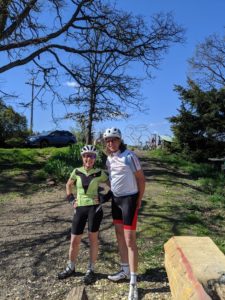 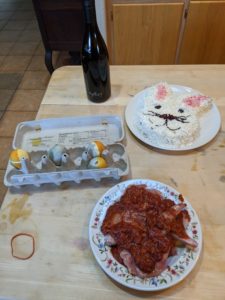 I’d boiled some rhubarb in an attempt to make a red dye. That didn’t work, but the rhubarb made a great base for my bbq sauce. I added garlic, chili powder, apple cider and vinegar, boiling it until thickened. I put a grill across the dugout and used cottonwood chips for smoke and cooked the legs and thighs I’d saved from the rabbit. A couple of potatoes went in the Dutch oven. 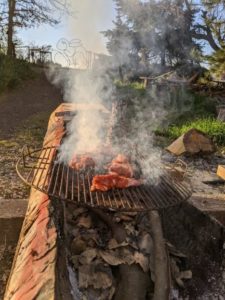 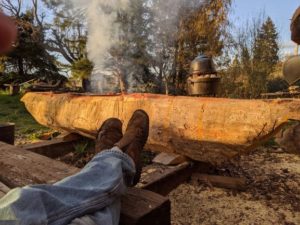 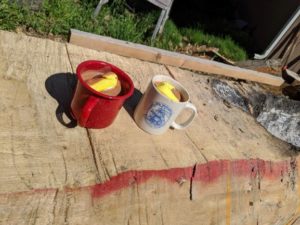 We had Peeps in a Puddle while the rabbit was cooking. Amy roasted some vegetables and we had bunny cake for dessert. Social Distance Bunny BBQ 2020 was a low-key but entirely pleasant affair. We went to bed happy, but hoping things get back to normal before next year. 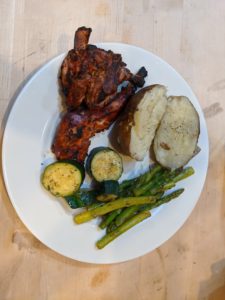