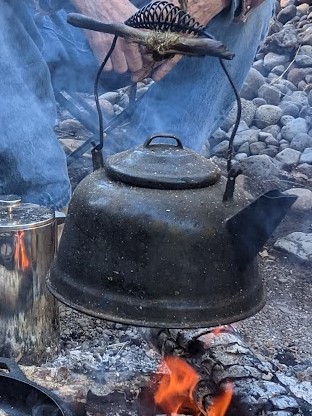 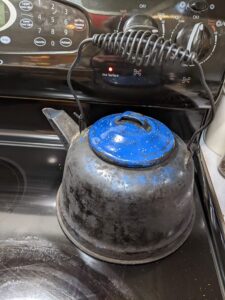 It is a quiet morning, the light still dim. Everything seems calm and muted, even the birdsong heard through the open window. I turn on the light over the stove and set the kettle on for tea. We had a very elegant stainless steel art deco kettle, but the bottom warped after boiling it dry on the wood stove and filling it with cold tap water. Now it wobbles and the heat doesn’t transfer well so I brought in this tea kettle from my camping gear.

It’s not elegant.  Made from stamped steel, it is simple in design with a broad, flat base and a coiled wire handle. The blue granite enamel is mostly hidden by a baked on layer of soot and there is a line of white ash in the crease formed where the spout meets the pot.  My wife wants me to get a new kettle and put this one back in the garage. I understand Amy’s objection, but the camp kettle’s filthy patina holds a hidden charm for me, tickling something deep in my soul.

The water begins to boil and a low but insistent rumble emanates from within the pot. As I pick it up to pour hot water into my mug I catch the scent of wood smoke, a mixture of pine, fir and vine maple which has been seared onto the kettle over countless campfires. 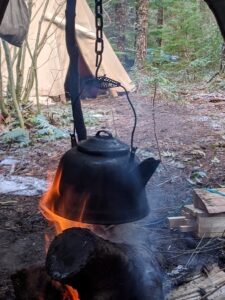 That woodsy aroma wafts me back to last weekend when Amy and I took the dogs and set up the tipi by a remote stream and spent three days enjoying solitude together in the woods. Simply sitting next to each other in the forest, or taking the dogs for a hike. Cooking our meals over the fire and just being together, undisturbed.  At peace.

The smoky perfume of the tea pot takes me back to last fall when my little brother and I camped on an abandoned spur road above Willard. Surrounded by older second growth fir growing up through the lava beds we foraged wild mushrooms to cook over the open fire, burning deadfall we gathered from the firs and the cottonwoods.

I recall camping with a bunch of bikers on a stream in the pines in a little draw south of Heppner. We’d ridden half a day through the wheat lands to get there, over pavement so hot it blistered. I could hear the tar bubbles pop as my tires rolled over them.  Bud the Throb got drunk that night and built a fire so large it could be seen from outer space.

I remember when Ed’s brother-in-law, Jim, returned to the states after teaching English in Japan for several years. Ed was working, but his wife Kathy thought it would be a good thing for me to take her brother up in the woods and show him what the real Oregon was all about.  Jim was an effete city boy with no affection for the outdoors. It was one of the worst ideas Kathy ever came up with, and that is saying something.  I took Jim up Post Canyon to look for chanterelles. We found a bagful but it was raining pretty hard before we got done.  The old tipi Thad and I had lived in years before was still set up. The rotting olive canvas hung in tatters from the poles but it did afford some shelter. I pulled free some slabs of pine bark from an old stump and soon had a popping, smoking blaze going.  I whittled some skewers from vine maple and retrieved a rasher of bacon from my knapsack.  Wrapping the bacon around a plump chanterelle I impaled it on the skewer and roasted it over the fire. Kathy’s brother was horrified when I offered the delicacy to him.  He looked at me with disgust as I ate the dripping mushroom right off the stick. Jim left for San Francisco the next day.  I never saw him again.

When we were in college my roommate Robert and I hitchhiked with some girlfriends out to the McKenzie River. We bought a roll of clear plastic and some rope from the “If We Don’t Have It You Don’t Need It” market in Rainbow.  We stretched the plastic between some trees to make a tent and stayed up late, sitting around the campfire until it got cold enough to cajole the girls into our sleeping bags.

My buddy Thad and I had a year and more of campfires when we dropped out of high school to live in the woods. We gathered firewood from the dry creek bottoms and dragged vine maple and cottonwood branches back to camp. Propping the longer sticks against a large tree, I would stomp on them to break the wood into smaller lengths which we stockpiled for the winter.  At night we would stare mesmerized at the fire trying to decipher the strange runes formed by the burning coals. Stirring the fire to life in the early morning I would set the tea kettle on to boil.

That faint scent of smoke brings me back to Boy Scouts.  Staggering down Eagle Creek Trail under the weight of my dad’s old Trapper Nelson backpack. The canvas and wood torture device dwarfed my skinny pre-adolescent frame. The other boys soon discovered the flat top of my pack formed a shelf they could stack rocks on without my noticing. I was exhausted when we stumbled into 8 Mile Camp. We shared two-man canvas pup tents and cooked our dinners in flimsy aluminum mess kits. After scrubbing the kit clean with sand and rinsing it in the creek, I pulled my boots off. I had a large blister on each heel. I crawled into my sleeping bag. I rolled around until the sharp rock beneath me nestled into my side, just below my ribs and I fell fast asleep. It was all worth it the next morning, though, when we hiked along a series of stupendously beautiful waterfalls, even walking behind one of them, staring through a curtain of cold water.  The trail was carved into a rock face with the creek forming a punch bowl hundreds of feet below.  Iron rings had been hammered into the rock with a steel cable strung through them for a hand hold. I gripped it tightly its entire length until the trail opened up onto a wooded slope and I was past the danger.

I drift further back to when I was a small child, camping with my family, all of us crammed into the big oiled canvas umbrella tent.  Dad would pump up the Coleman white gas stove for mom to cook on. We’d sit around the campfire after dinner, roasting marshmallows.  Each of us would strive for the perfect marshmallow, carefully turning it over the coals, watching it bubble and tan a beautiful golden brown, just before it burst into flame.  We’d yank it away from the fire and blow out the flame. We’d let it cool almost long enough before sucking the gooey, burnt confection off the stick, the charred sugar tasting so good we forgot all about our contest.

The dog barks, disturbing my reverie. I open the laundry room door and he greets me with a full body wag, licks my hand and head butts me in the crotch. I sit in my chair, wrapping my hands around the warm porcelain mug. I really should get a new teapot. 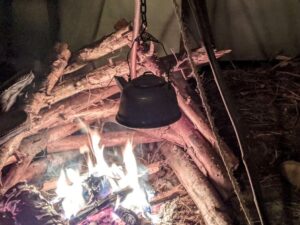 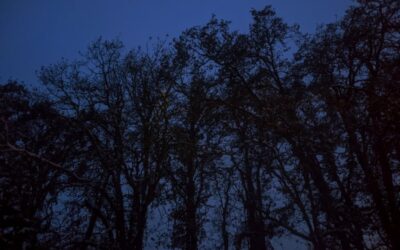 Sitting in the dark, listening to the heavy, wet snow slough off the branches of the oaks. There is a steady drip from... 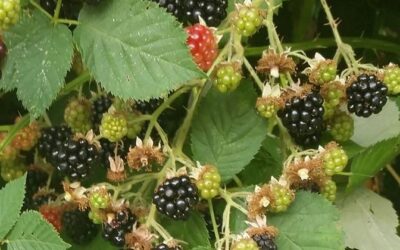 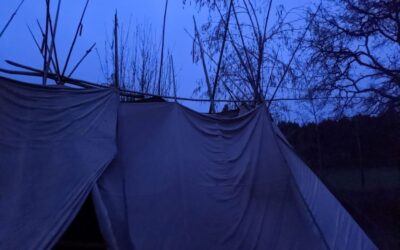 What are you looking for? | camping reverie | poetry | teapot | Throwback Thursday