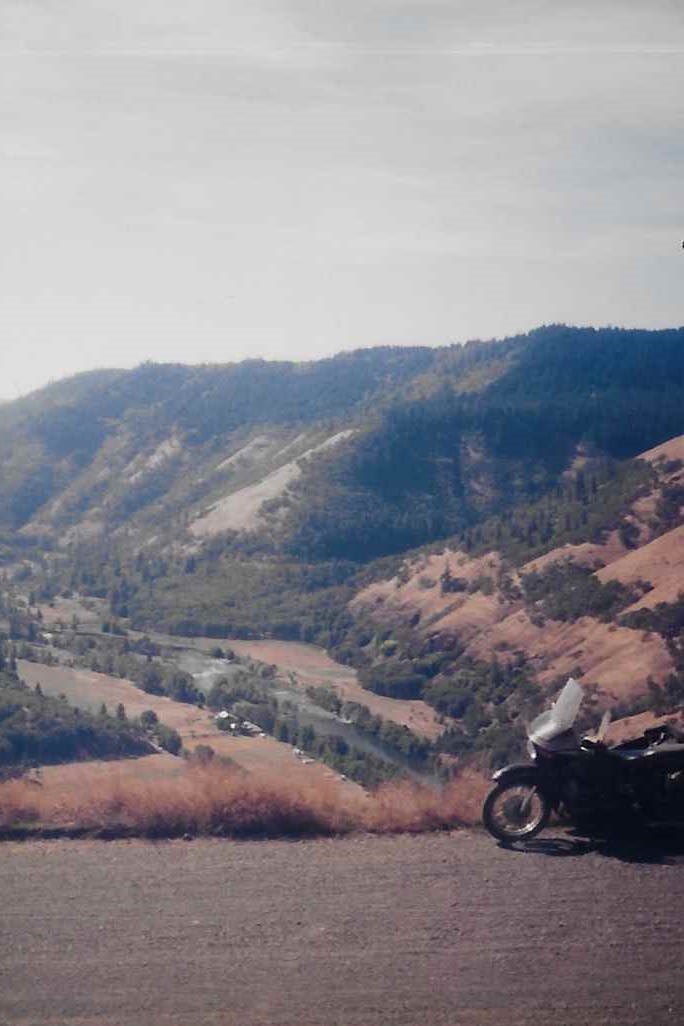 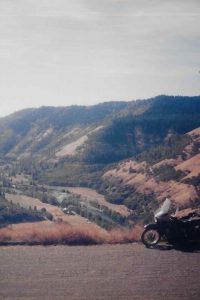 In 1997 I was employed as a private contractor for Portamedic and several other companies which specialized in collecting data for big insurance companies.  I served my corporate masters by traveling around the Columbia Gorge doing physicals and collecting blood and urine samples from insurance applicants.  It was a weird job but I could set my own hours and it paid the rent a while. It also paid mileage and I spent all day riding my motorcycle on the back roads of five counties. I met some interesting people and rode through some beautiful country. That fall I enjoyed one of those near perfect days: I made some money and had a great ride.

I had been out killing bugs with my face all afternoon and most of the evening. I left for The Dalles around 2 pm and rode my old Russian sidecar up the Columbia Gorge. There was no wind; the river was like a mirror. I finished the first exam about 3. That left me an hour and a half to get to Trout Lake for my next appointment.  Crossing the Columbia at Dallesport,  I watched the river swirl beneath the Indian fishing platforms, a living postcard from an earlier time.

I rode west to Lyle on SR14. The leaves were turning color, the air was crisp, the sun shining warm on the basalt cliffs. I went north at the Klickitat River and crossed the bridge to Fisher Hill Road. My friend Joel calls this his own personal Pike’s Peak. I know just what he means. I was power- sliding around the gravel loops all the way from the river’s edge to the ridge top. I had to remind myself to hold some in reserve- the woods were crawling with hunters. Mammoth RVs were around every other bend! Pulling out of the scrub oaks into the pineys at the top of the hill, I was running late. Trying to catch up I managed to hit 50 mph on the straights. The motor was rattling a little, pipes echoing on the overrun then rapping through the forest as I cracked open the throttle through the turns, sliding the rear and spraying gravel. I passed through Timber Valley at 4 pm. Only thirty minutes to get to Trout Lake!

Panakanick Road. Wahkiacus Heights. I was getting closer. I stopped on the mountain top above Glenwood to check my map. Looking north across Glenwood Meadows and the Conroy Lake basin I could see the foothills on the far side. The woods and groves of dark conifers dotted with orange and yellow birches, cottonwoods, maples and oaks. The farmers were busy with the fall cutting. The hayfields were all different heights, from full and ripe to fresh cut stubble, new bales laid out in perforated rows. There were some slash fires burning, the smoke rising in four separate columns, billowing straight up. The smoke hit atmospheric pressure and spread out in a discrete layer, with the purple and green ridges beneath and Mt. Adams looming above, magnified by the haze, virginal in a new dress of pure white snow. There was a surreal feeling to the late afternoon with the  smoke muting the fall colors and tinting the autumn sunlight amber.

Oh Shit! The fuel line had chafed through, gas pouring over the hot engine!  I didn’t have time for this! I had to fix it without getting my hands dirty or fouling my white shirt.  I got it fixed and tried the cell phone to let my client know I was running late. No luck, I couldn’t get a signal out here. I got back on the bike and tore down the mountain. I hit pavement again on the east end of BZ corners-Glenwood road. I took Cemetery Road to the Glenwood-Trout Lake Highway and roared west with the throttle pegged. I was low on fuel and hit reserve still well out from Trout Lake. I rolled into town on fumes, twenty minutes late.

My client was not at home, he was out getting the hay in. I rescheduled with his wife and tanked up at the local Chevron. Hauling ass, I retraced my route to Timber Valley. I got stuck behind a hunter pulling a horse trailer on the dirt lanes. He put up so much dust I couldn’t see the road and he sped up on the straight sections taking his half out of the middle. I hung back until I got to a straight where I could see some of the road ahead and I blew by him at 50+ with inches to spare. I made it to my appointments in Timber Valley just as the sun set. The woods were tart with the smell of wood smoke as evening fires were kindled to thwart the chill of nightfall.

The work took an hour and it was pitch black in the deep dark forest when I got out of there. The dew point had dropped and the rig was damp. It was cold and I layered up before going on.

My instrument lights weren’t working so my speeds were “prudent”.  There was a maze of dirt lanes to get through before I hit pavement. Once I left Timber Valley, the woods gave way to pasture and the full moon lit up my world. The groves of trees and the gullies held smoke from the hunter’s campfires and the farmer’s hearths. Blue and ephemeral, the pools of smoke floated like ghosts above the meadows, glowing in the moonlight.

An oncoming car came over the rise, brights on and spewing dust, blinding me. A second car followed. He dimmed his lights late revealing he had only one low beam. Dazzled by glare and dust I careened past them both and crossed the intersection at Appleton back out onto the pavement.  I passed through a patch of smoke opaque from my headlights. It thinned and rose to form an ethereal blanket, just above my eye level. My helmet sliced through it as I rushed past.

Suddenly my mirrors were filled with huge white orbs. Startled I thought I was being overtaken, then, realizing it was not a truck but the moon, I relaxed.

I followed the snaking asphalt down towards the great river, looping across the hillsides and down the steep defiles that separated them.  Basalt spires rose to meet me, carved into fantastic shapes by the Missoula floods. I rushed down Canyon Road towards the ancient high water mark.

At the bottom of the road I paused at the stop sign, unwilling to get back on the highway. So I went right, on the old county road which parallels SR-14 going west. I had glimpses of the Columbia River shimmering in the moonlight below the contorted rocks. After passing Catherine Creek the road twists through the cliffs descending toward the river’s shore.  I chased my shadow through the cliffs, the moon behind me as I rode.

The road bottomed at the highway in the shadow of looming rock walls. On my left Rowland Lake reflected the moon, the still surface broken here and there by fish rising to feed. Out on SR14 the traffic was very light. Large insects darted past my headlight. A really big one got over my windscreen and nailed me right between the eyes. It was large and juicy. I saw a wing and leg bounce behind my glasses. It looked like grasshopper parts.  It seemed strange to have grasshoppers swarming at night. Maybe the moon brought them out.  That must be what the fish were feeding on back at the lake.

I slowed through Bingen. The bridge approach west of town was under construction and the road was a confusing array of signs, lights and conflicting directions .

The toll bridge across the Columbia was beautiful. The river below was dark and mysterious. The air glowed, almost phosphorescing beneath the drawbridge towers. To the south, ahead of me, Mt. Hood was luminescent against the purple star sparkled sky. Wells Island was brightly moonlit off my right. The cliffs of the gorge marched silently into the shadows on either side of me.

I motored through the toll booth and up the familiar curves of Highway 35. I could almost taste my dinner, too long postponed. Turning south off the highway I pulled onto my road. The moon filled the narrow canyon of Neal Creek.  Cattle, befuddled by the light, hadn’t bedded down for the night. They grazed quietly in the pasture as I passed Sunday Ranch. I pulled into my driveway and parked the bike. I paused to scratch my dog and re assure him all is well as the coyotes’ song echoed up the draw. I’m home.