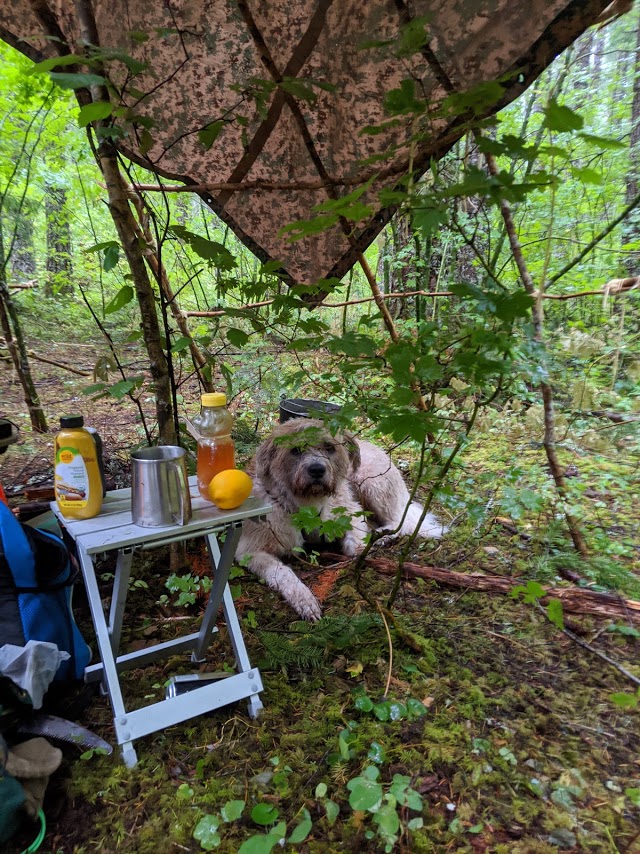 Summer 2020 in Oregon featured plague, drought, and catastrophic forest fires, but it had been raining hard the first few days of fall. Mike and I went up in the woods Friday to see if we could find any mushrooms. 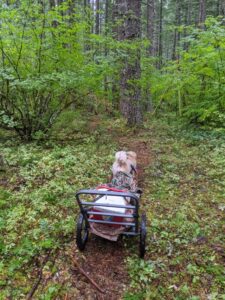 Walter Dawg and I arrived before Mike. Once parked, I strapped my gear onto the game cart and harnessed the dog to the traces.  It was pouring rain. At camp, I unhitched Walter and hurriedly unloaded the cart. 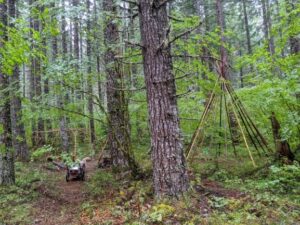 After throwing some tarps over the wickiup frame, Walt and I headed into the forest in search of mushrooms and firewood. We didn’t find any mushrooms, but I found a downed snag that looked like it might have some dry wood inside, so I sawed off a length and dragged it back to camp.

Mike was there when we got back. I left the saw with him and he set about processing firewood; Walter and I went back out in the rain to try and find some dry tinder. There really wasn’t anything dry, but I shoved some of the less damp moss into my pocket and collected as many small twigs as I could carry. I picked up some fir boughs with browned needles, hoping they would be resinous enough to catch fire despite being wet. 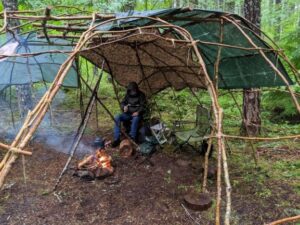 I made a nest of needles and twigs in the fire pit. Mike draped his vest over the tripod above it to keep most of the rain off our tinder. He had split some of the wood down to kindling and smaller splinters. I lit some birch bark and slipped it into the tinder and carefully fed slivers of wood into the flame. It went out. I tried again, this time dripping candle wax over the tinder. For a moment it looked like it was going to take, but a drop of water made it past Mike’s vest and put it out.

The fire stubbornly refused to stay lit.  It went out several times and my lighter quit working. I was able to ignite the last scrap of bark with a ferro rod and light a candle from that. It took a good deal of effort, twenty minutes, two candles and all the birch bark I had in my pocket. before we had a sustainable fire. 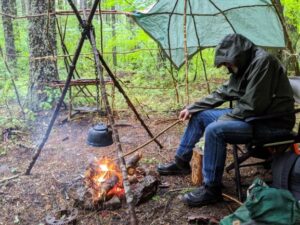 Mike roasted hot dogs for lunch and I put the kettle on to make hot toddies for dessert. Once we had some hot food in our bellies and the fire had taken the the chill out of our damp clothes, we ventured out in the weather to have another look for chanterelles. 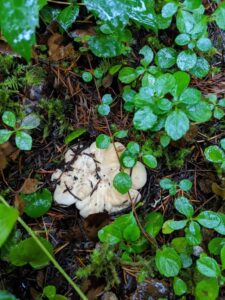 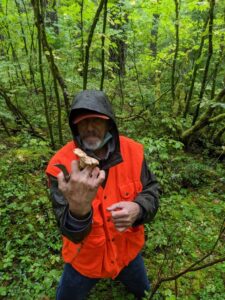 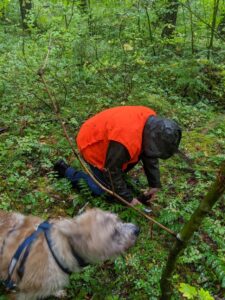 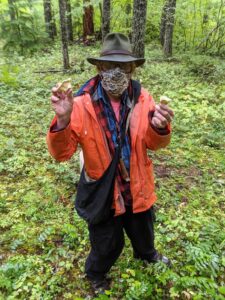 The season is only just starting. The mushrooms were well hidden and few in number, but we were able to collect enough for our immediate needs. 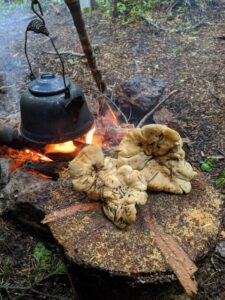 We returned to the wickiup to dry ourselves by the fire. After a couple more toddies, it was time to go home. We doused the fire that had been so difficult to start, packed up and headed back, each anticipating mushrooms for dinner. 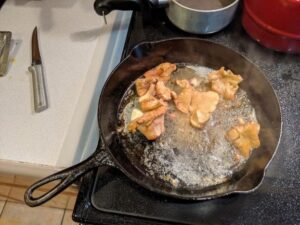