When Will I Learn? 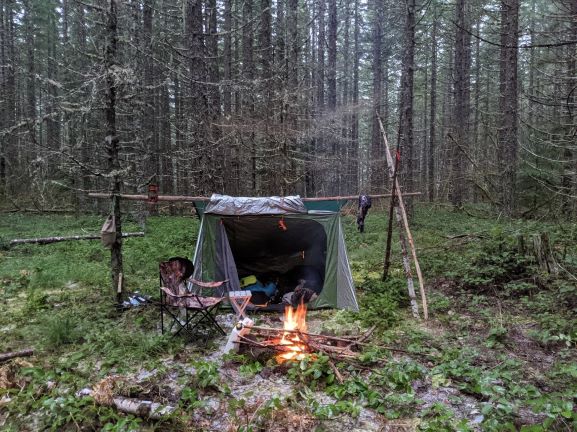 “You know, you don’t have to go camping if the weather is going to be awful,” remarked my wife as she eyed the leaden winter sky.

Despite the deteriorating weather, I stubbornly clung to my plans. Sure, it was December, but the forecast was for light rain and the freezing level was 5,000 feet – well above where I intended to camp. It should be fine. 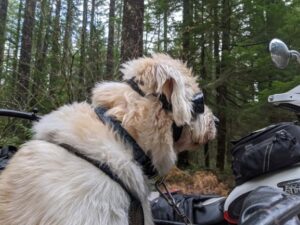 I strapped my gear to the bike, Walter Dawg hopped in the sidecar and we rode into the woods, arriving at the trailhead just a little before noon. It was colder than the weatherman had led me to expect. 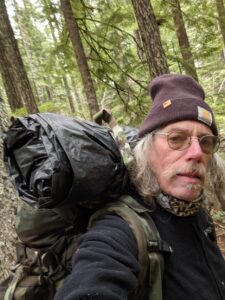 Cap’n Ron was already there, with his camp set up beside his car. I wanted to camp further in, over near the canyon. Parking the Triumph next to Ron’s car, I shouldered my pack and struck out cross country. in search of a campsite. The route was flagged but there was no trail. Too brushy for the dog cart or travois, I hauled Walt’s gear for a change. 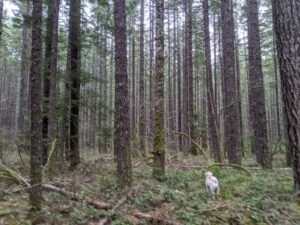 Walter and I hiked to a canyon, about a mile through the woods. As I picked my way through the underbrush, I spotted movement. Something large and tan, ahead and off to the right. Great. Must be a Bubba in Carhart’s, hunting.

Meanwhile Walter’s attention had been caught by something, off to the left. He ran over to investigate.

Suddenly, the forest erupted. We had spooked a huge herd of elk. They split up, half the herd running away from us, following the animal I had spotted off to the right. The other half ran towards us, veering off at an angle and passing in front of Walter dog. I could see their black manes and steamy breath as they thundered by. Walt and I were as startled as they were. 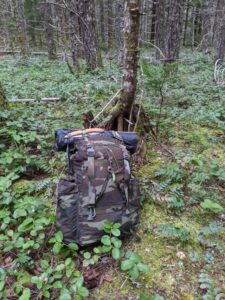 I dropped my pack in a clearing near the edge of the ravine and hiked back to the bike to retrieve the water and a second pack with my food and stove. 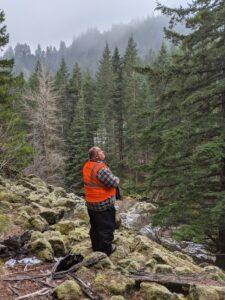 Cap’n Ron returned with me; after I dropped off my provisions in the meadow, we did a short reconnoiter along the canyon. I was hoping to find a better campsite, perhaps with access to the creek, but I didn’t find anything that looked better than the clearing where I had left my pack. It was getting late so we didn’t spend much time looking. The Cap’n went back to his camp, leaving me at the meadow.

I used my camp stove to cook some ramen for lunch, tarting it up with shallots, garlic, a boiled egg, and some cauliflower mushroom. I looked around me as I ate, deciding exactly how the tent should be situated and where my fire pit should go. The ground was littered with deadfall; the stuff under the trees was pretty dry.  Finding tent-poles and getting wood for a fire shouldn’t be a problem.

A light east breeze blowing, but if the predicted front moved in, the wind should shift to a westerly. There was a sapling I could lash the tent ridgepole to. If I ran the ridge east to west, I could stretch the tent out to the south and place the fire to the north ensuring the smoke wouldn’t be a problem even if the wind did shift. I finished lunch, rinsed my pot and started cutting poles to erect the tent. 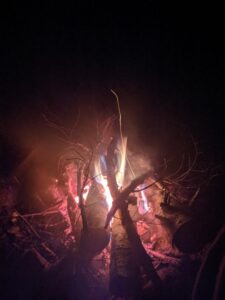 After I had my shelter secured, I collected firewood. It was dark by the time I kindled my fire. It took a little coaxing to get it going, but once it was established, I could take a break. I leaned back in my chair with my feet warming by the fire. The yellow glow from the flames flickered up and down the trees closest to camp. An impenetrable darkness extended beyond them. Occasionally I could hear animals moving through the brush. An owl hooted over near the ravine. 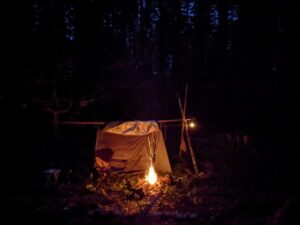 About eight o’clock, it began to rain, lightly at first. Remembering the last time I used this tent, I set up a tarp over the top, hoping it would shed the water better than the shallow slope of the roof, perhaps keeping the tent from collapsing on me during the wee hours of the night. A half hour later the tarp was secured; I ducked into the tent. I had a brief discussion with Walter about who was sleeping in my bunk. The argument ended in a draw; I was able to force my legs past the dog and into my sleeping bag. We were asleep in minutes.

Just before midnight I awoke to the sound of ice pellets bouncing off the tarp. I grabbed a flashlight, slipped on my moccasins on and ducked out to take a look. The tarp was secure, and so far, the ice was sliding off the back. I wandered away from camp to relieve myself against a tree. When I returned, I threw some more wood on the fire and crawled back in bed.

There was freezing rain and sleet all night. I dozed fitfully, waking occasionally to sweep my flashlight back and forth, checking the tent for signs of collapse. Sleet rattled against the fabric. Around four in the morning the tarp started to sag under the accumulated ice, but my lashings held and the tent stayed up. I slapped the roof repeatedly to encourage the ice to slide off. It didn’t help much but it did frighten Walter. He leapt off my bed and searched the tent for a safer spot, finally settling in the corner next to my face. I rolled over, pulled my blanket over my nose and went back to sleep. 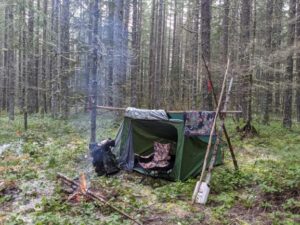 I arose with first light, a little before seven.  The rain had stopped. The tent had survived the night. To my surprise, I still had some coals. I rekindled the fire and put some tea on to heat while I packed my gear. The lashings were still encased in ice, so I left the tent up while I hauled my pack out. Perhaps the ice would melt by the time I got back. 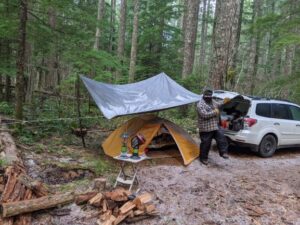 Cap’n Ron was fixing his breakfast when I got to the trailhead. I left my pack at the bike and went back for my tent.

The ice hadn’t melted, but I was able to get the tent down and free my cordage. I had the camp cleared and was back at the bike by ten thirty. It was beginning to rain. 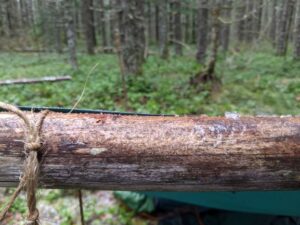 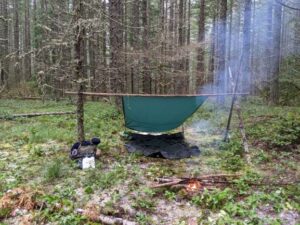 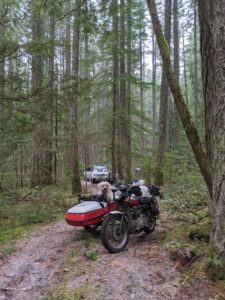 Anxious about the road conditions, the Cap’n struck camp while I loaded my pack and tent on the bike. When we got back to the pavement, we found the road was slick with black ice. We gingerly made our way out of the woods. After about three miles, the ice disappeared and we had clear roads the rest of the way home. Walter tells me he had a good time.