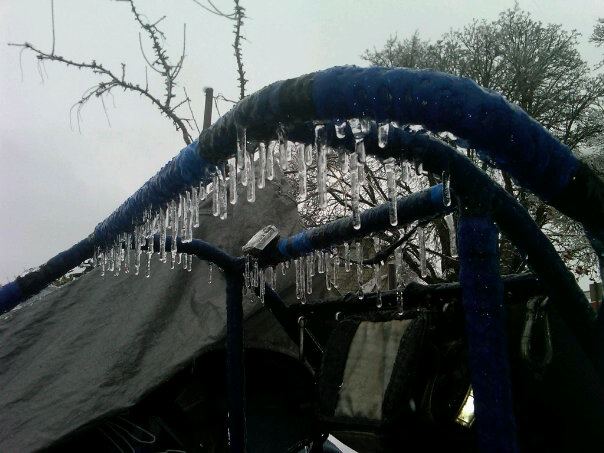 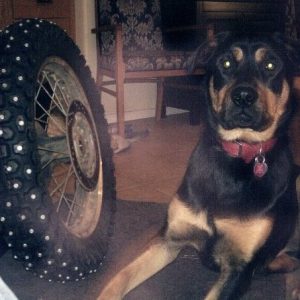 We spent the weekend driving on ice in the mountains east of Hood River. Mr. Cob had a two wheel drive Ural with machine screws driven into the knobby tires. My KLR had machine screws in the knobs also. I put chains around the rear tire part way through the ride. 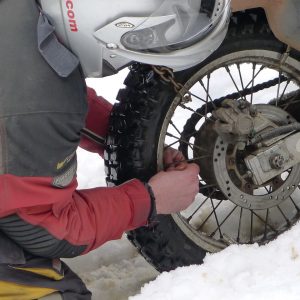 We got back from our scouting foray Friday afternoon, just as it started to rain. Within minutes of rolling our rigs into the shop it was pouring down freezing rain, sleet and hail. I set Dave up with a driver and several hundred 1/2″ #8 sheet metal screws and he began screwing them into his knobbies in preparation for the next days ride. Little did we know just how much we would need them….

Mr.Cob Gets Screwed Bacon Tour 2010 from Adventure Sidecar on Vimeo.

Mr.Cob & Road Rash shared breakfast with us before we climbed aboard the sidecars for a ride in the hills. We had a good coating of freezing rain the night before and didn’t need to go too far before we found the road encased in ice. It started as black ice, deceptive and invisible, and soon became a thick, hard sheet of slick ice, about an inch deep. You can see the white lines which are scratches etched into the surface by the sheet metal screws in our spinning tires. At one point Road Rash climbed out of the sidecar and onto the back of the bike to give me more traction. You can see Mr. Cob come up behind us on our right. He slowed as he closed the gap and lost traction, fading from sight in my mirrors. He had to turn around and retreat to a flatter stretch of road. From there he was able to take another run at the hill and claw his way to the summit. Even with two wheel drive and screws in his rear tire he had trouble making that hill. We tried to walk back down to give him a hand but the ground was so slippery we could not stand on it!

John Corrado is a local rider who lives on Fir Mountain. He caught us near the summit by the micro wave towers. He said his wife told him she saw a couple of bikes go by the house so he hopped in the Bronco to see who it was. He decided to go for a drive and ended up following us for a while. This section was dirt road, but you couldn’t tell it as the surface was encased in a thick sheet of ice. I found there was a strip of gravel and rough snow at the left edge of the road. If I could put the bike right on that edge I had enough traction to control the rig at a pretty good speed. It would get sketchy if the road dropped off or a rock or a tree got in the way. Out in the middle of the road I had trouble steering the bike. We stopped to chain up after I slid to the side of the road trying to round a downhill right turn. Mr.Cob went ahead while I put the chains on. John came along as we were finishing;he said he was going to chain up before he got to the steep downhill up ahead. Road Rash and I caught up with Cob at the top of the hill…

Huskey Road was a steep climb, with a snowy, icy roller-coaster through the trees up on top. RoadRash shifted his weight over the rear wheel to help me maintain traction on the ice uphill. I would need to lean forward to get the front tire to bite on some of the sharper slick corners.