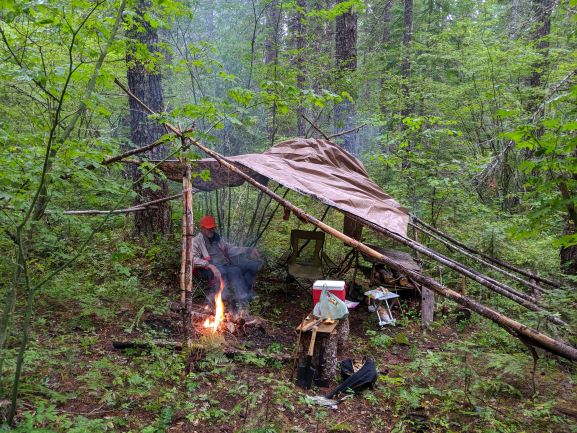 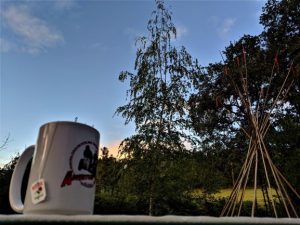 The end of summer is collapsing into a cycle of unsettled weather. A hot day with clear blue sky will suddenly cloud up and let loose a torrent of rain. The night will go black and crack open in streaks of lightning, thunder echoing and rolling across the mountains.

That is just what happened last weekend. It rained hard all Saturday night. Sunday morning dawned clear and blue, the cool morning air washed clean and fresh. It would have been criminally negligent not to head to the hills and hunt for mushrooms.

By the time my friend Mike and I organized ourselves for a foray, the fresh morning had turned into a muggy afternoon. When we arrived at the mushroom hunting grounds, the temperature had dropped again and it was beginning to mist. 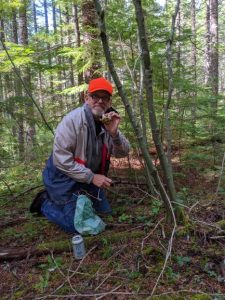 Wasting no time, we plunged into the forest, searching for chanterelles. We began to find them almost immediately. A flash of white, out of place against the dark green forest floor caught my eye. Kneeling in the spongey duff, I could see the edge of a chanterelle lifting up the moss. I cut it free, brushed the dirt and needles from the cap and dropped it in my bag. Peeling back the moss, I found three more where the first mushroom had been. A foot to the right was a bump in the moss. I found two more chanterelles there. There were “mushrumps” everywhere! I crawled backwards, testing each bump and finding more chanterelles as I went. Turning to look behind me, I saw mushrooms where the toe of my boot had scraped up the moss.

I had a small heap of mushrooms now. I stopped picking and turned my attention to cleaning them, carefully brushing the dirt from the caps and carving the dirt from the base of the stems. Down the hill I could hear Mike’s shouts of triumphant glee – he had found another patch and was busy filling his own bag. 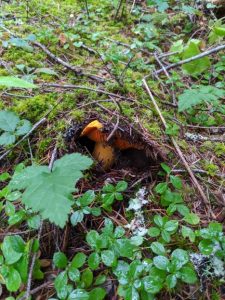 We worked our way up the hill and back down the draw on the other side, before doubling back through the woods to where we had left the ice chest and camp chairs. We found more chanterelles and several nice lobster mushrooms. Our bags were so full we couldn’t fit any more into them. 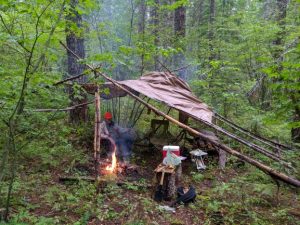 I scavenged some firewood and gathered twigs and Spanish moss to start a fire. Using greasy tortilla chips for an accelerant, we got a fire going just as it started to rain. Mike tied a tarp across some poles to fashion a lean-to, while I cut some vine maple for roasting sticks. There was beer and bacon in the ice chest, and we had two bags full of fresh mushrooms. It was obvious what needed to be done. 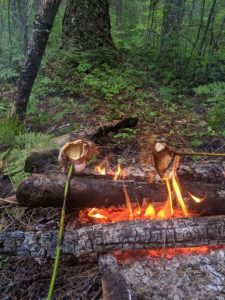 Selecting the nicest specimens in our collection, we impaled them on our skewers and wrapped them with bacon, pinning it to the mushrooms with slivers of vine maple. The fire flared as the fat dripped off the sizzling bacon. There really is nothing finer than a hot, fire-roasted, bacon wrapped chanterelle washed down with a cold beer. We sat by the fire, listening to the rain tapping on the lean-to while we gorged ourselves. When our bellies were full and the beer was gone, we put out the fire, packed up and went home. Mushroom season has officially begun. 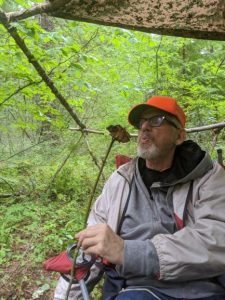 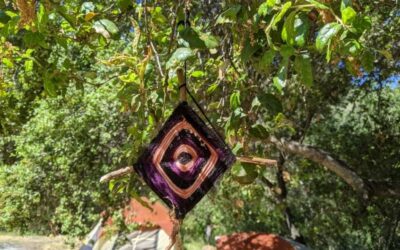 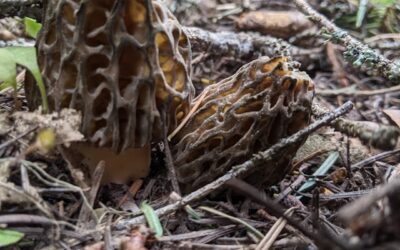 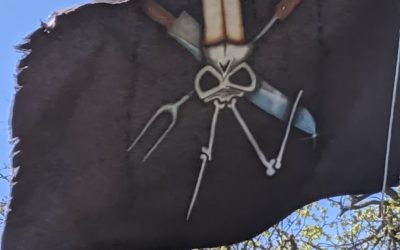